The drain should be placed at the lowest point of the shower. This will ensure the water funnels down to the drain rather than sitting in a puddle.

It’s similar to a sloped surface with water running down. You want to create this effect in the tub and that is only going to happen by installing a shower drain at the lowest point. Anything other than this will lead to puddles.

When asking “Where should the drain be placed in a shower?” you have to look at not only the alignment of the tub but also where the drainage system is. Everything has to make sense with the layout of the bathtub.

This is why a lot of people get lost in the idea of having the drain right in the middle of the tub.

While this is aesthetically pleasing, it’s not mandatory. You just have to make sure the water has enough space to run down the slope to where the drain is. If there is no slope (even a little one) you are not going to see the water get to where it needs to go!

For those asking “Where should the drain be placed in a shower?” this guide will go through the details of setting up a shower drain and what to look for during the process. 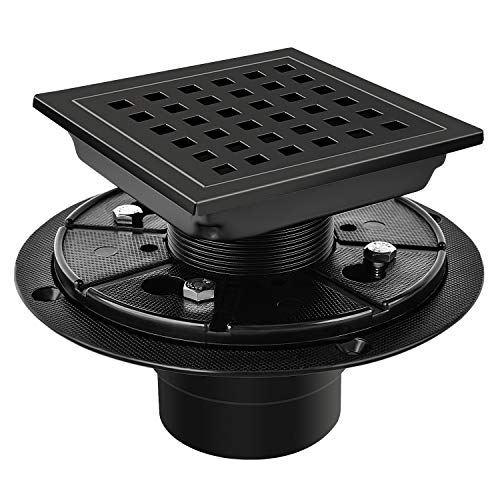 How To Place A Drain In The Shower

When asking “Where should the drain be placed in a shower?” you will want to look for the basics and that begins with the lowest point.

Whenever you walk into a tub, you will realize it is always on a slope.

This is done on purpose. Otherwise, why wouldn’t the team behind the installation create a straight surface?

It has to do with wanting the drain to work as designed. Otherwise, the water is going to sit in one place creating puddles and unwanted messes.

2. Don’t Forget the Flow of the Water

You will have to think about the flow of the water too.

This is a detail some homeowners forget to assess and it leads to unwanted messes. The water that is coming from the faucet should be directed down to the drain.

The drain can be anywhere but the water should flow in front of the faucet. This will make sure it doesn’t collect behind or to the side of the faucet leading to mold.

The flow should be directed to the drain as it will help funnel water better especially when on a slope.

In most cases, you will see the drain set up straight in front of a faucet or close to the side.

However, it will always be down on a slope.

3. Look at the Drainage System’s Layout

When asking “Where should the drain be placed in a shower?” you also have to focus on the rest of the drainage system.

Your shower drain is not disconnected from the rest of the system.

It has to be integrated into the drainage system so the water and mess go outside. Otherwise, you are going to have serious leaks inside the property!

The drainage system connected to the drain should be appropriately installed to ensure it funnels water to where it needs to go outside the property.

Look at the placement of any vents that are interlinking drains (i.e. shower + sink) while also making sure the drainage system will work as intended.

This is a must when designing the layout of your shower.

1. How Far Should Shower Drain Be From Wall?

It’s recommended to have a 15-20″ buffer from the wall depending on the size of the shower. This will help prevent damage to the wall while also tunneling water to where it needs to go.

2. Should You See Water In A Shower Drain?

It is okay to see water in a shower drain and it’s quite normal. This is done on purpose and is noted as a “p-trap,” which helps collect a bit of water to prevent sewer gases to leak into the shower.

Where should the drain be placed in a shower?

The drain has to be placed in a manner where the water isn’t going to sit in puddles. This is why most will have it at the lowest point while closer to the center of the tub.

You can have it off to the side if the tub is larger.