Shower doors are a wonderful feature in any bathroom.

They are easy on the eyes, work well for modern requirements, and are also easier to use than the traditional shower curtain.

You end up opening up a lot of space in the bathroom with something as simple as a new shower door.

This is why it becomes important to figure out why the shower door won’t stay closed with a magnet.

A shower door that won’t stay closed with a magnet likely has a worn-down magnetic strip and needs to be cleaned. To fix this issue, try tightening the screws first. If this does not work, unscrew the door, clean the door using any glass cleaning agent, remove the latch, peel off the magnetic strip, and replace it with a new one.

This will help correct the issue and make sure the glass shower door is good to go again.

You have to be meticulous when repairing a shower door’s magnetic strip. If you don’t, it will continue to pop open even when you are not around.

This guide will explain more on what to do if a shower door won’t stay closed with a magnet. 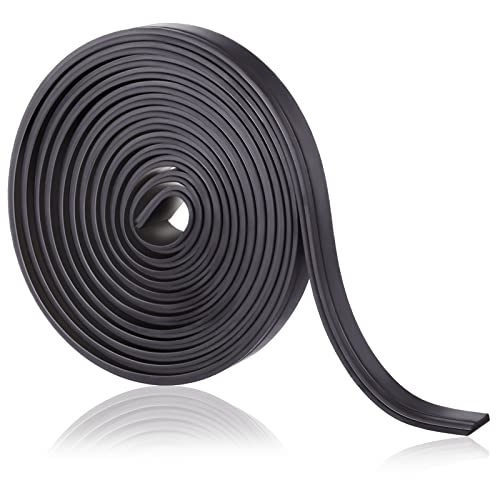 1. Tighten Or Replace The Screws

To fix a shower door magnetic strip, you want to start with the basics.

It’s common for people to want to directly replace the magnetic strip and that’s fine. However, it is also recommended to look for simpler solutions first.

This includes thinking about tightening the screws that hold the latch in place.

This goes a long way with older shower doors because they do begin to lose their stability as time goes on. By tightening or replacing the screws, it might be enough to maximize how the magnetic strip and latch work.

Take your time with this step and ensure you do look into the structural integrity of the screws on the shower door.

You should also take the time to clean the shower door before replacing the magnetic strip.

This is always a good way to maintain the shower door and ensure it does stay closed. Sometimes, the residue that is present around the hinges can get in the way of how it functions.

This includes how the shower door opens and/or closes.

If it does not close properly, there might be something that is in the way. If you clean it using vinegar or a cleaning agent, this will help stabilize the shower door.

3. Swap Out The Magnetic Strip

Now, it’s time to swap out the magnetic strip.

You are going to start by neatly peeling the magnetic strip off the door. In most cases, it will come off easily once you get a good grip.

After this, you will measure the old strip and cut the new one until it’s the same size. Try to be as accurate and precise as possible during this step.

With the new strip in hand, place it where the old one was on the shower door. Use the adhesive to ensure it sticks in place by pressing down on it.

You are now going to reset the latch.

When everything is in place, the shower door can be set into position. When doing this, you will want to ensure it’s aligned properly and does open the way it is supposed to.

As soon as the shower door is in place, you can begin to test how it opens and closes. Do this a few times and get a better feel for how stable the door is now.

If it doesn’t open on its own, the job is done.

These are the main steps as you figure out why a shower door won’t stay closed with a magnet.

A shower door that won’t stay closed with a magnet likely has a faulty magnetic strip. To fix the issue, remove the latch, peel off the old magnetic strip, cut the new strip until it’s the same size as the old one, stick it into place, and then reset the latch.

This will take care of the issue and make sure the shower door stays closed.

A good magnetic strip will take care of this and ensure you don’t have to worry about the shower door randomly opening during the day.

Always make sure to use the right type of magnetic strip while doing this. It will save you a lot of trouble when it comes to preserving how the strip performs.