When using an electric recliner, it’s often assumed everything will go smoothly and it will work as intended.

Sometimes, this is not how things play out!

If the electric recliner is stuck in the open position, the most likely issue is an energy fault. To fix the issue, unplug the cord, wait 5-10 minutes, and plug it back in. This should refresh the electrical charge. If not, flip the recliner upside-down, loosen the wingnut, and push the recliner back into position manually.

For the most part, unplugging the cord should fix the issue.

The electric recliner can get stuck due to how electricity passes through the system. It might not always work as you want it to.

This article is going to take a look at what to do if the electric recliner is stuck in the open position and what to use. 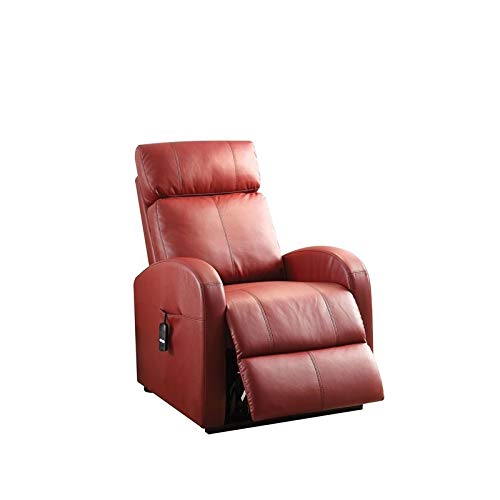 Steps To Follow If Electric Recliner Is Stuck In Open Position

If an electric recliner is stuck in the up position, it’s likely an issue with the electrical charge that is running through the fixture.

This can happen from time to time.

The best solution when this occurs is to unplug the unit. This will ensure the electrical charge comes to a stop allowing you to reset the electrical recliner.

It is possible for the electric recliner to get stuck in the open position and the best solution is to reset the fixture. This is going to ensure everything gets a fresh start, which will also allow you to push it back into the closed position.

Some recliners are going to have a manual override built into the chair.

You can use this as well to help get it back to its original position as intended.

You will want to wait at least 10-15 minutes after unplugging the electric recliner.

A lot of people don’t do this and that is what holds them back. It’s best to make sure you are ensuring the right steps are taken.

This includes resetting the electric recliner, making sure it’s in the right position, and then plugging it back in.

A lot of people make the mistake of rushing to restart the electric recliner. This is a mistake because it does not let the electrical charge come to a dead stop.

Wait at least 10-15 minutes and then see what happens with the fixture.

3. Plug And Re-Test The Recliner

Now it is time to plug the unit back in.

You are going to notice the electricity push through the unit and now it will begin to move again.

In most cases, it will go back to the closed position as you want it to.

Play around with the settings to make sure everything is working as it should. You will have to figure out what is going on with the recliner as that is a must when it comes to doing things the right way.

A lot of people don’t do this and that is what holds them back.

You will have to flip the recliner upside-down.

The purpose of doing this is to gain access to the wingnut at the bottom. This tends to be right near the reclining mechanism that is set up for the recliner to change positions.

With an electric recliner, the wingnut might not be as easy to access as it would be in a traditional recliner.

This is due to the recliner being powered using electricity.

However, you will want to look for the springs as that is where the wingnut is going to be on your recliner.

When you find it, loosen the part.

This will allow you to manually push the recliner back to its desired position.

Look at these steps if your electric recliner is stuck in the open position.

If an electric recliner is stuck in the open position, it’s best to unplug the unit, wait at least 10-15 minutes, plug it back in, and re-test the setting. If this does not work, flip the recliner upside-down, loosen the wingnut, and see if that helps.

For the most part, the issue has to do with the recliner’s settings.

When you are toggling through the settings quickly, it can create a situation where things don’t work as they are supposed to.

Take the time to focus on this and you will see the results that you want. Don’t attempt to force the recliner back to its original position. The steps mentioned here will help.